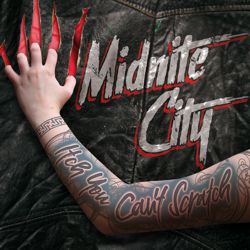 Hot on the heels of two highly acclaimed albums, MIDNITE CITY return in 2021 with their highly anticipated third album “Itch You Can’t Scratch” on June 11th. With new label Roulette Media in tow, as well as new management and booking agent, the band are back looking and sounding better than ever with a new array of songs that will melt your face, so strap yourselves in for the ride of your life. It’s all about the good times!