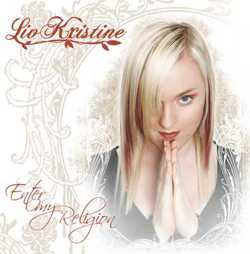 ALLEGRO TALENT MEDIA/ PLASTIC HEAD/ ZYX MUSIC will release Liv Kristine’s "Enter My Religion" first time as a vinyl with an extra single, cassette with two bonus tracks and as a double CD with unreleased tracks and demo recordings on August 19th, 2022!

In 2021 LIV KRISTINE's EP "Have Courage Dear Heart" was released and now we present the re-release "Enter My Religion" of the charismatic and nature-loving Norwegian. The album will be released for the first time as a vinyl with an extra single, as a cassette with two bonus tracks and as a double CD with unreleased tracks and demo recordings.

The album was remastered at ANDY CLASSEN's Stage One Studio. Not only the sound has been refined; also the cover and the photos, which were taken during a special photo session in the studio of KAI R JOACHIM from that time. The photo material shows a special depth and authenticity of the experienced artist, moreover, she hows herself in a very personal light - sometimes delicate and up close, or completely different - as a woman - absolutely self-confident in the whole large cosmos.

The songs were also adorned with universal influences. Sitar sounds introduce the title track, which comfortably gets under your skin with its insinuating melody arcs and LIV KRISTINE's delicate voice. The opener "Over the Moon" (PETER TÄGTGREN) hints at powerful metal, but then develops into a driving pop song. "Fake a Smile" is an airy ballad, with LIV KRISTINE's voice charmingly taking center stage and setting the tone for most of the songs on the album. The title track "Enter my Religion" is a mid-tempo anthem with a wise appeal to your inner self, your self-esteem, happiness and creativity. The pace continues with "All the Time in the World". Straighter and more guitar-driven is "My Revelation“. Pleasing harmonies are in the foreground in the warm and soothing composition "Coming Home".

'Streets of Philadelphia' - BRUCE SPRINGSTEEN's theme song to the Oscar-winning movie was interpreted as a tribute. The arrangements being technically based on the original, LIV KRISTINE adds new and softer accents to the track. "You Take Me Higher" is extraordinarily different and more dance-oriented, with a subtle drum'n'bass overlay.

With "Trapped in Your Labyrinth" and "Fake a Smile" LIV KRISTINE spoils her listeners with profoundly sensual ballads and rock songs. The fairy-like singing, accentuated by piano sounds, envelops music lovers in a web of security, melancholy and longing.

"Enter My Religion" convinces as a spicy and varied album. The blond Norwegian succeeds in creating a fine album with romantic touches, which never slips into kitsch. Simply authentic, profoundly philosophical, surprising and absolutely LIV KRISTINE - luminous and enlightening.

Demotracks CD: 1 Over the Moon, 2 Trapped in your Labyrinth, 3 You Are the Night, 4 Streets of Philadelphia, 5 You Take Me Higher, 6 Stjernenacht (unreleased), 7 Woman in Me, 8 One Thought Closer (unreleased)

Demotracks Tape: 1. Enter my Religion, 2. For a Moment

Bonus single Vinyl: 1. Trapped in your