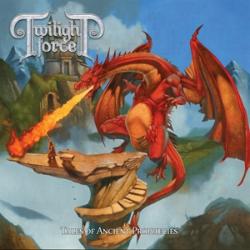 The foundation for what is now Twilight Force was laid out in 2011, when Felipe and Daniele decided to bring back the golden age of Epic Symphonic Power Metal. By combining strong melodies with orchestral arrangements and fast tempos, they wanted to create an intense and memorable listening experience; immersing the audience in a magic universe filled with wonder, heroic tales and mesmerizing mythical worlds.

Using their vast experience from previous musical endeavours, their classical training and technical proficiency, they started working intensely and meticulously from their studio in the heart of Sweden, the "Twilight Forge". The music took shape and grew from the depths of their hearts, and the fundaments of the songs swiftly came into existence. After searching for suitable companions to fill up the ranks of Twilight Force, they finally heard tales of Christians' great mountain-shattering vocal range. Upon hearing the songs, he soon felt the urge to join the quest, and the musical vision of Daniele and Felipe could be realized. Brilliant drummer Robban (Sabaton, Eclipse, ex-Jeff Scott Soto, Astral Doors (live) and excelling bass player Borne soon also joined to complete the line-up of Twilight Force. The first ever Adventure Metal album, Tales of Ancient Prophecies, will soon be unleashed upon the world, and a second album is already in the making.