SIX SILVER SUNS is a recent addition to the Finnish rock field, but the band's members are all well known musicians. Janne Mannonen on the drums is known from Finnish legendary band, YUP. Vocalist Markku Kuikka has been heard on many of heavy and hard rock albums. Guitarists Toni Bite and Harri Petjakko, bass player Teo Lehto and keyboardist Sammy Tabermann have released dozens of records with several bands. Helena Haaparanta is heard as a background singer.

Six Silver Suns has emerged from the desire to wander back to the golden years of rock and pop music: the 70s and the 80s. The band’s inspiration comes from progressive rock, goes towards Blue Öyster Cult, and combines all with the catchy tunes and melodies from AOR and Hard Rock scene.

Their first release is entitled "As Archons Fall”. The album includes ten versatile songs which have beautiful harmonies and melodies all the way. "As Archons Fall" is a fantastic journey to the Six Silver Suns Universe, where any song can lead a listener into different kind of cosmic soundscapes. You cannot underline just one song only because "As Archons Fall" is an entire experience for the listener. There is also pleasant cover song, The Mamas and the Papas - "California dreamin`". The album's opening song - "Lord of the Southern Tower" lead you into distant worlds and tune you in to following songs. Until you have reached the song "A Night upon My Shoulders", you will understand the whole. Of course there is some pieces to pick up as a enjoyable moments as you like.

"Six Silver Suns has two main composers, and both have a strong vision. On my other band YUP, I felt I did not have much to offer as a composer, while now I feel like I’m more on my own field, musically. When Toni and I started to write music for Six Silver Suns, we soon realized we work really well together, even though our tastes in music are quite different”,  explains Janne Mannonen.

"Six Silver Suns has given me a chance to sing in a completely new musical environment. Our goal has been to take influence from the 70s and it was surprisingly easy to find that natural groove. We all have been playing in quite different type of bands, but all that experience came together nicely in Six Silver Suns, and - at least to my ears - we sound good! " Vocalist Markku Kuikka says.

“This record is an awesome and casual journey into the world of rock music where there are no rules. Imagination and the freedom to compose without frames was a key element of this record for myself. I think this record will be a joy for many people for a long time to come”, explains Toni Bite 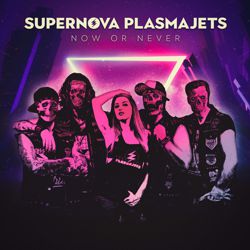 80s series such as, "Stranger Things" are breaking records on Netflix, fashion labels throw "80s retro models" on the market every month and Mötley Crüe are returning to a US stadium tour after the apocalypse with Poison and Def Leppard.

It smells, tastes and almost feels like it was 1984 again! The Supernova Plasmajets have come to take you by the hand and travel back to the future with you:

That means modern female fronted metal with the spirit of the long-missed 80s stadium rock. Since 2013 and releasing two records, they are on the road as ambassadors of the 80s and have come to present the music of this great time as gnarly rockers to a new generation.

Whether at big festivals like Summer Breeze Open Air, Rock The Ring, Metal Hammer Paradise, Baltic Open Air, Rock Of Ages, the European tour with Kissin 'Dynamite, The New Roses, or rockin out on tour with Eskimo Callboy, JBO, and Sinner... The Mannheim Supernova Plasmajets were born to inspire an audience and take them into an 80s parallel universe!

On October 22nd, 2021 the eagerly awaited new album "Now Or Never" will be released via Pride & Joy Music, followed by a big tour with John Diva & The Rockets Of Love, across the German republic! DAN LUCAS first came to fame in the German Democratic Republic during the early 80’s as the front man of different successful German Rock groups. After his escape from the GDR, he moved to West Berlin where he soon became the singer of classic German Hard Rock group KARO who released the album “Heavy Birthday” (Frontrow/ Warner) in 1988 and went on tour with MEAT LOAF. After the split of KARO in 1989, LUCAS moved to Munich in 1990.

During the following years, he put out two solo albums under the name of DAN LUCAS on the Canadian label Marloboro Music, i.e. “Canada” in 1992 and “2000!” in 1995. The hit single “Heart Of America” from the “Canada” album, which was recorded in Vancouver, Canada with musicians from LOVERBOY and Manny Charlton (NAZARETH) participating, was used for a McDonald’s commercial later on. In 1993, LUCAS won a song contest in Istanbul, Turkey with the track “Canadian Dream”.

Numerous guests including Robin Beck, Lisa Dalbello, John Pierce, Kane Roberts, Michael Landau & Reb Beach appeared on the “2000!” release. This record was recorded in Burbank, California and includes the track “Close Your Eyes And Say Goodbye” which LUCAS wrote together with Desmond Child. In 1996, the singer changed to the Arcade label which put out the album “News” in the same year.

In 2018/2019, DAN LUCAS won the casting show “Voice Of Germany Senior” which brought him massive attention both from fans and media alike. In the following time, he joined the Rock Meets Classic 2019 tour and released a cover version of JOURNEY’s smash hit “Don’t Stop Believin’” via Universal Music Germany.

“The Long Road” now is his very personal, brand new solo album which shows the singer from a more intimate side. Guitarist, songwriter and producer Raimo Rommedahl (ex COUSIN BILL) and singer/guitarist Jesper Max (ex FRAISE) were touring musicians who met in early 2014. They shared a deep desire for making their own music, and a dream of building their own professional studio. The result was the opening of premium Rockstone studio in 2016.

While studying sound engineering they started to record what would become INTERCORE’s first album. In order to complete it they brought in session drummer Thomas “Shuffle” Persson (ex  HIGHLANDER) to lay down the basics and who laster agreed to become a steady member of the band. After a series of testing bass players they fell in love for Robert Fallqvist's impressive skills and the group’s line-up was completed!

Raimo Rommedahl wrote most of the tunes and Jesper completed the lyrics and melodies to suit his voice. The album was recorded over a span of 4 years as the songs grew into something ever greater.

INTERCORE’s mission is to spread the great heavy metal music of the 80’s and 90’s. Bands like Scorpions, Thin Lizzy and Europe are major influences.

The band members all grew up on the west coast of Sweden close to Gothenburg which is widely known for its metal scene. With strong melodies, pounding drums and screaming guitars, INTERCORE hope to remind you of the golden age of metal music, where the inner core was made of great songs and melodies.

The album “Dreams For Sale” was recorded, mixed and produced by Raimo Rommedahl and Jesper Max in Rockstone studios in the Gothenburg-area and mastered by Henrik Heinrich at Nevo Mastering in Sweden. Band logo by Merja Niklasson, album cover designed by artist Elsa Eliasson Hallström.